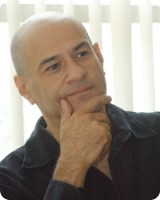 Born in Jerusalem in 1954, Ari Ben-Shabetai studied composition with Mark Kopytman at the Jerusalem Rubin Academy of Music, and with George Crumb and Richard Wernick at the University of Pennsylvania, U.S.A. where he received his Ph.D. degree in Composition. Ari Ben-Shabetai currently serves as head of the Composition, Conducting and Theory Department at the Jerusalem Rubin Academy of Music where he teaches composition, theory and analysis. The composer has won many awards, scholarships and prizes both in Israel and abroad. His Sinfonia Cromatica won the first prize in the 1994 Israel Philharmonic Orchestra composition competition, taking the work on tour to Germany, France, Italy, and the U.S.A. with Maestro Zubin Mehta conducting. Magreffa for symphony orchestra was commissioned in 1995 by Maestro Lorin Maazel for the Pittsburgh SO and was performed both in Pittsburgh and in Jerusalem. In 1996 he was awarded the Prime Minister of Israel Prize for composers. Ari Ben-Shabetai was Chairman of the Israel Composer's League during 1994/5, and once again, in 1997/2000.