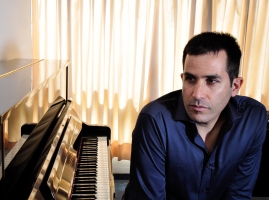 Faculty of Theory and Composition, Jerusalem Academy of Music and Dance

Ayal Adler was born in Jerusalem. After receiving a Diploma in Piano and Composition from the Rubin Jerusalem Conservatory, he enrolled at the Jerusalem Academy of Music and Dance. There, he completed a B.Mus. and an Artist Diploma in Composition (with Honors). He then pursued a Doctoral degree in Composition at McGill University in Montreal.  Dr. Adler is a full-time, senior lecturer in Composition and Theory at the Jerusalem Academy of Music and Dance since 2001. In recent years, he held various academic positions, such as Chair, Composition and Conducting Faculty; Dean of Students; Doctoral Committee and others.  He currently serves as Director of the Israeli Composers' League (ISCM).

Recipient of numerous awards and grants, including :First Prize at the International Composition Competition RMN Music in London, 2018, for his work Chase;

Prime- Minister Award for Composers (2008); Two ACUM Prizes ( equivalent to ASCAP):  "Achievement Award of the Year", for Quintet (2012), and orchestral award for Crystallization (2003);  Commissions from the America-Israel Cultural Fund, including a Fulbright Grant for Doctoral Studies, and others.  Mr. Adler was nominated Composer-in-Residence for the Meitar ensemble from 2006 -2012, and later on became the Ensemble's Advisor. Four compact discs containing his works were released in recent years. His works are regularly published by the Israeli Music Institute (IMI), and the Israeli Music Center (IMC).   Ayal Adler's works are recorded and played on BBC Radio 4; Radio Swiss; Radio France; Israeli Radio Kan HaMusica, and others.