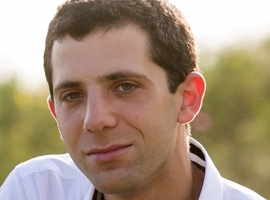 Eilon Roseman was born in Israel 1990.

He began composing at the age of fifteen and composed his first works independently during his high school period.

In 2016 his work Insights: Three Preludes for Piano was chosen as a commissioned work in the Arthur Rubinstein Competition for Young Pianists, which held in October 2016 in Beijing, China. The work was performed during the semifinal round of the competition by young pianists from various nations.

In 2018 his work Disillusionment won the Second prize in the Mark Kopytman composition competition. Later that year, the work was performed in a concert of the Meitar Ensemble at the Jerusalem Music Center.

In 2019 he won the first prize in the Gertrude Kraus competition for composing original music for dance.

In 2019 he graduated from the Jerusalem Academy of Music and Dance, where he studied with Dr. Josef Bardanashvili, as well as under the guidance of Dr. Amit Weiner, Prof. Michael Wolpe and others.

He works as a composer, arranger and orchestrator. His arrangements were performed by different ensembles including Consortium Musicum Israel and Jerusalem Street Orchestra.